I recently visited the garden of the Manor House at Upton Grey, designed by Gertrude Jekyll  in 1908 when she was 65.

By the time Rosamund and John Wallinger bought the Manor House in 1984 the garden was little more than an unkempt jungle; it is now considered by many to be the most accurate restoration of a Jekyll garden in existence.  My photographs show the burgeoning green growth of spring;  for photographs taken in summer and details about visiting the garden please use this link to the Wallinger’s website  http://www.gertrudejekyllgarden.co.uk.

The Yew Tree is thought to be over 2,000 years old; the close-up shows a hollow centre and new outer growths of the trunk as described in my earlier post Y is for Yew Trees.

View towards the Rope Walk

View from The Tennis Lawn

Formal Garden from The House 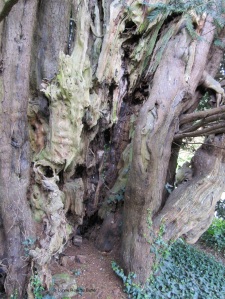 Wild Garden Pond with Ancient Yew at centre back of photograph

4 thoughts on “The Restoration of a Gertrude Jekyll Garden”